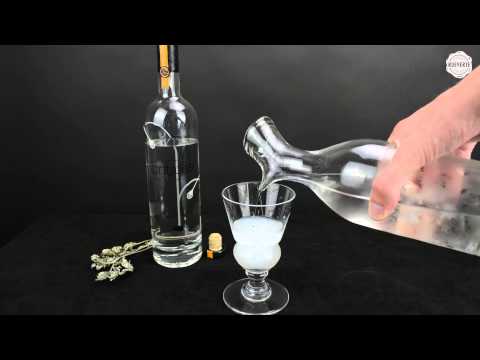 Content: $8.92 $178.40/Litre Prices incl. VAT plus shipping costs
La Maison Fontaine is an ultra premium absinthe, handcrafted amongst the beautiful Jura Mountains in Pontarlier. When you discover the absinthe capital of the world, Pontarlier (France), has 200 years of Absinthe heritage and the world's oldest absinthe stills, there's only one thing to do – handcraft a new ultra premium Absinthe. La Maison Fontaine has been masterfully refined using 15 natural herbs. Some are kept secret, others we're happy to shout about – notably, the world-renowned Pontarlier-grown Grande Absinthe, which together with green anise and fennel is the “holy trinity” of any real Absinthe. An exceptional traditional Absinthe, a stimulating and refreshing drink. La Maison Fontaine Blanche was awarded the Grand Gold Medal at the Concours Mondial de Bruxelles in 2016. Colour: Clear. Louche: Cloud-white with some blue tints. The louche is beautiful to watch as it forms, neither too quickly, nor too slow. Aroma: Beautiful green anise and the distinctive flowery smell of Pontarlier wormwood, like an alpine meadow in spring. Taste: Sweet and refreshing green anise, intense wormwood and rich fennel, the holy trinity in perfect harmony. Notes of lemon and peppermint in the background, along with other tasty herbals and florals. Finish: Velvety and smooth, wonderful, the finish follows the aroma and taste. Don't miss out on the opportunity to discover this very special absinthe today!

- At first, savour your Mead Base Absinthe without sugar. It's naturally sweet so we don't think any sugar is needed. If you prefer after tasting it, feel free to add some according to your taste.

Browse all the products of: Emile Pernot

Close menu
Leave a review for this product
Write an evaluation

1899 : the young Emile-Ferdinand Pernot, a native of the Fougerolles region, where he had trained as a distiller, joins the Parrot brothers and together they establish "Emile Pernot et Cie" located in Pontarlier. Emile-Ferdinand's son, Emile-Joseph (don't worry, none of their sons were called Emile-Emile even though they loved this first name), a survivor of the World War I trenches, later registers the famous name "Emile Pernot".

2009 : The distillery moves from the center of Pontarlier to the magnificent old Cousin Jeune building in La Cluse et Mijoux, at the foot of the Château de Joux, the very same building where the young Emile-Joseph Pernot learnt his trade a century earlier. And you know what? It was a pure coincidence - the building had been a post office and a fire station in the intervening years!

The two century-old copper alembics used by Emile Pernot for their absinthe distillations were made by the famous firm of Egrot in the early 1900s. They were especially designed and built for absinthe distillation, and they are the only stills of their kind in operation anywhere in the world. These stills allow the Pernot distillery to produce absinthes of exceptional quality according to methods unchanged for a century.

This water carafe for absinthe has been specially commissioned by Absinthes....
$45.18 ¹

The absinthe and wine glass Amboise was named after the first Renaissance c...
$10.70 ¹