$10 discount + a Free bar jigger! Click here to get them
Cart
Your cart is currently empty.
Browse the shop and hopefully you'll quickly find wonders to taste.
Absinthes.com
Menu
Back

The Pernod distillery in Thuir is located in one of the historic homes of the brand near Perpignan, in Southern France. The distillery is part of Pernod’s factory where Suze, Byrrh and the firm’s wine-based aperitifs, are produced. It was officially opened in October 2013.
Pernod began the 2-year long construction of the site after the French law-makers voted to lift the nation-wide ban in 2011. 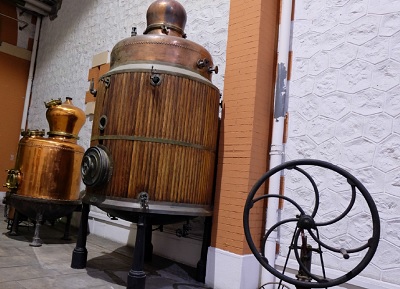 Henri-Louis Pernod was one of the first entrepreneurs to produce absinthe on a large scale, making Pernod one of the most emblematic brands in the early absinthe history. The Pernod Absinthe was created in 1805 in Pontarlier. Following the introduction of the ban of absinthe in 1915, the production ceased. To find out more about the ban on absinthe, read our article about the history of absinthe.

Today, Pernod aims at producing a high-quality, traditional absinthe. To that end, the distillery is a faithful recreation of the original distillery in order to retain the production methods and obtain the taste and flavor of the traditional absinthe recipe of the 19th century.
Henri Louis Pernod’s traditional craft process has been reproduced. One of the spirits which production process takes place in the historic Maison Pernot in Thuir is the new Pernod Absinthe “Recette Traditionnelle” – read more about it in our blog article. In the copper stills, the wormwood from Pontarlier and the green anise are distilled after maceration in a neutral wine-spirit base.